“He constantly was empowering me, which I think really affected the rest of my choices thereafter,” Mara said of her collaborations with Fincher.

It’s been a good two years for Rooney Mara. The Oscar nominee has received strong reviews for her back-to-back appearances in Guillermo del Toro’s “Nightmare Alley” and Sarah Polley’s “Women Talking,” but those films were preceded by a multi-year hiatus from acting. Fans of the actress have had to make peace with her sporadic work habits, given that she has become famously selective about the roles she’s willing to take.

In a new appearance on the LaunchLeft podcast, Mara explained that her selectivity is partially a result of an unpleasant on-set experience in the late 2000s that almost led her to quit acting.

Director David Prior discusses Guillermo del Toro’s Cabinet of Curiosities, his love for “The Autopsy” short story, and The Empty Man‘s release.

Some bodies are more than meet the eye, as seen in the “The Autopsy” installment of Guillermo del Toro’s Cabinet of Curiosities. Based on Michael Shea‘s short story of the same name, the episode sees a coroner brought in to do the autopsies of several miners who died when one of them set off an explosion with a mysterious object, only to learn of the surprising truth behind him.

F. Murray Abraham and Luke Roberts lead the cast of “The Autopsy“, which hails from The Empty Man writer-director David Prior. Primarily set in an isolated location, the episode is a chilling game of mental chess as Abraham’s Dr. Carl Winters grapples with the revelation of why the miners died, and how he may be next.

In anticipation of its premiere, Screen Rant spoke exclusively with director David Prior to discuss Guillermo del Toro’s Cabinet of Curiosities, his installment “The Autopsy,” his and del Toro’s shared love of reading, The Empty Man‘s mishandled release, and more.

Join Alanah Pearce (game writer), Troy Baker (voice actor), Mike Bithell (game director), and Austin Wintory (game composer) as they talk about all the games, movies, TV and ‘whatever else’ that took their interest that week, from four unique perspectives in the games industry. 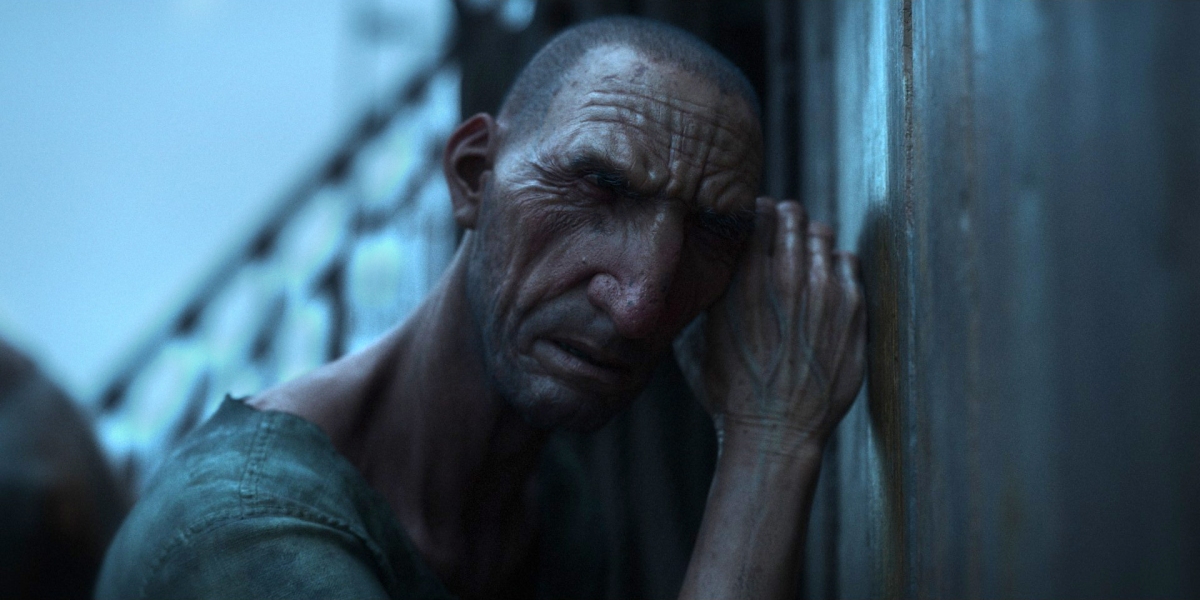 The animators tell IndieWire what it was like collaborating with Fincher on the mo-cap character animation and giant, slimy crab.

It’s easy to see why David Fincher chose “Bad Travelling” as his first foray into directing animation. He made his feature debut with the ill-fated “Alien 3,” after all, and the premise of this third-season episode of “Love, Death + Robots” is a bit like setting the plight of the Nostromo on the high seas: A giant, slimy crab devours the crew of a shark-hunting vessel, with only the cunning navigator surviving to battle the beast. (It also makes up for Fincher’s aborted take on “20,000 Leagues Under the Sea” at Disney.)

“You don’t necessarily want to see them come to unnatural ends,” Fincher said about the crew in the production notes. “The idea was not to make them despicable, but self-serving. That’s the thing I always loved about Harry Dean Stanton and Yaphet Kotto in ‘Alien’….”

When I lured Amanda Seyfried into Mank, her ability to be simultaneously knowing and warm opened that role to a (much) larger conversation than the script might have otherwise intimated. People may have thought of her as a rom-com-edienne, but she’s got a lot more going on under the hood. Including the rare ability to make one reassess one’s own imaginative shortcomings.

Read the full note on Amanda Seyfried by David Fincher 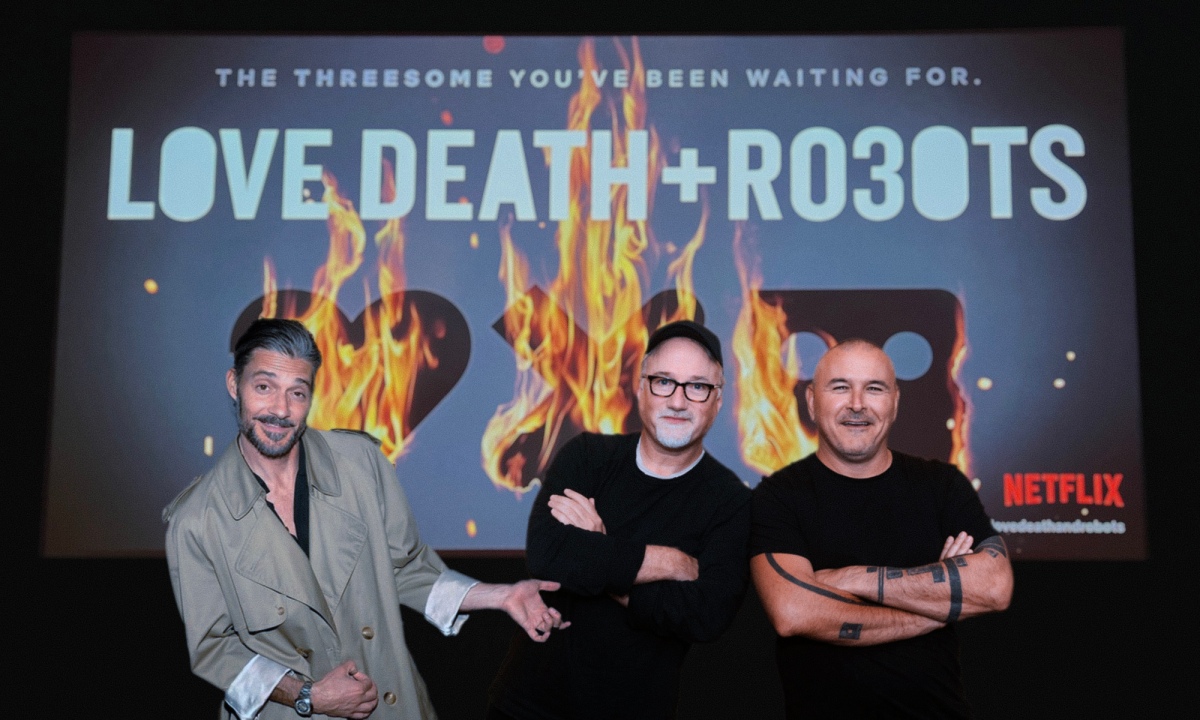 Install the app and listen to:

After nearly 40 years in the entertainment business, 3-time Oscar-nominee, David Fincher, has seemingly done it all. From his early years directing music videos for Madonna and Aerosmith, crafting memorable films like Seven and The Social Network, and working on acclaimed TV shows such as House of Cards and Mindhunter, Fincher’s resume appears to be complete. But what about animation?

With the launch of Volume 3 of Netflix‘s mind-bending Love, Death and Robots anthology series, Fincher can finally check animation off his bucket list with his episode, titled “Bad Travelling.” In this seafaring horror story, a group of Jable shark hunters on a far-away planet are attacked by a giant crustacean. With the sailors’ lives in jeopardy, chaos and mutiny ensue.

Although Fincher has decades of experience working behind the camera on live-action projects, we wanted to know if animation brought any new challenges to the seasoned director.

“Ultimately, directing comes down to understanding context and sculpting time, light, and behavior with that innate understanding,” Fincher told IGN. “In some cases, like in the case of motion capture, there are people in onesies with ping pong balls hanging off them, and you’re going, ‘Okay, now remember the ship is rocking and all…’ You’re there to add a little imagination sauce to all the other shit that they’re trying to keep in their heads. I mean, it does tend to look a little like Saturday Night Live. It’s a ridiculous thing to be asking somebody to do a one-act play, dressed in pajamas. So that aspect of it, it’s the same thing. You’re playing dress up, right? And you’re trying to say, ‘Look, from the audience’s standpoint, this needs to happen a little faster here, a little… This can go a little slower. Find that word.’ It’s all the same shit.”

Dominik also discusses what it was like to direct Season 2’s Charles Manson episodes.

It’s not often that we as viewers and lovers of television get an inside scoop on what the future of a favorite show would have been — especially once it’s canceled. In the case of Netflix’s Mindhunter, which released its second season back in 2019, the series technically wasn’t canceled so much as a possible third season was put on “indefinite hold” per David Fincher, though the series’ executive producer has also confirmed in interviews since that Season 3 likely isn’t happening, partly due to the fact that it would have required an even steeper budget than the previous one. Now, thanks to Season 2 director Andrew Dominik, we have even more of a sense of why Mindhunter‘s dead-in-the-water third season would’ve had a higher price tag.

In speaking with Collider‘s own Steve Weintraub in a long-spanning interview about his documentary about Nick Cave and Warren Ellis, This Much I Know to Be True, the director also briefly touched on not only his experience with directing two of Mindhunter‘s Season 2 episodes, but also what the third season would have entailed in terms of its main story — as well as which real-life figures the FBI Behavioral Science Unit team consisting of Holden Ford (Jonathan Groff), Bill Tench (Holt McCallany), and potentially even psychologist Wendy Carr (Anna Torv) would have crossed paths with.

It’s Showtime! When Steven Soderbergh joins Rob, the two friends get to ask the questions they’ve never asked one another. In this episode find out about Steven’s new film Kimi, and how he thinks Sex, Lies, and Videotape now feels like a Jane Austen novel.

This week marks 15 years since “Zodiac” was released in theaters, and save for the actors looking 15 years younger than they do now, the film still feels like it could be released today. If anything, “Zodiac” feels more like a product of 2022 than 2007. The country is more obsessed with serial killers than ever before, with true crime podcasts and documentaries continuing to draw massive ratings, Zodiac killer memes being used in presidential primaries, and the latest Batman movie taking the form of a serial killer drama.

That makes it a great time to revisit “Zodiac,” as well as a good opportunity to take a deep dive into the making of the film. “Zodiac” attracted as much attention for its painstaking production process as it did for the finished product, as the always detail-oriented David Fincher went above and beyond to make sure everything in his film was historically accurate. Sometimes his methodical process hurt his relationships with the cast, but one thing is for certain: They made a great movie.

Read the 15 facts about the making of “Zodiac” that you may not have known.