This video essay examines the innovative use of sound recording and mixing in David Fincher’s Mank (2020). Whilst Mank received a limited theatrical release, the film is most widely available via the Netflix streaming platform. The essay takes as a starting point the rerecording and spatialisation of the soundtrack, with a focus on the home viewing experience. Donnelly argues that the re-recording process used on Mank’s soundtrack could potentially suggest a method by which films released into the domestic market could retain the reverberant sonic signature of cinematic exhibition. The published screenwork draws upon interviews with Fincher’s sound designer Ren Klyce, as well as the work of experimental composer, Alvin Lucier in order to better understand the experience of listening to Mank in our own rooms.

Watch the video essay and read the research statement

With a project comprised of so many academy-endorsed contributions, it might be difficult to imagine one single scene representing the sum of the whole. But nestled within the complex structure of Jack Fincher’s time-hopping screenplay is a sequence that combines all 10 of the “Mank” nominations and shows how each department and performance elevated the next: Mank and Marion’s stroll through San Simeon.

Join acclaimed director David Fincher, actors Gary Oldman and Amanda Seyfried, and the cast and crew of Mank, for a peek behind the curtain of Netflix’s black-and-white ode to Hollywood’s Golden Age. 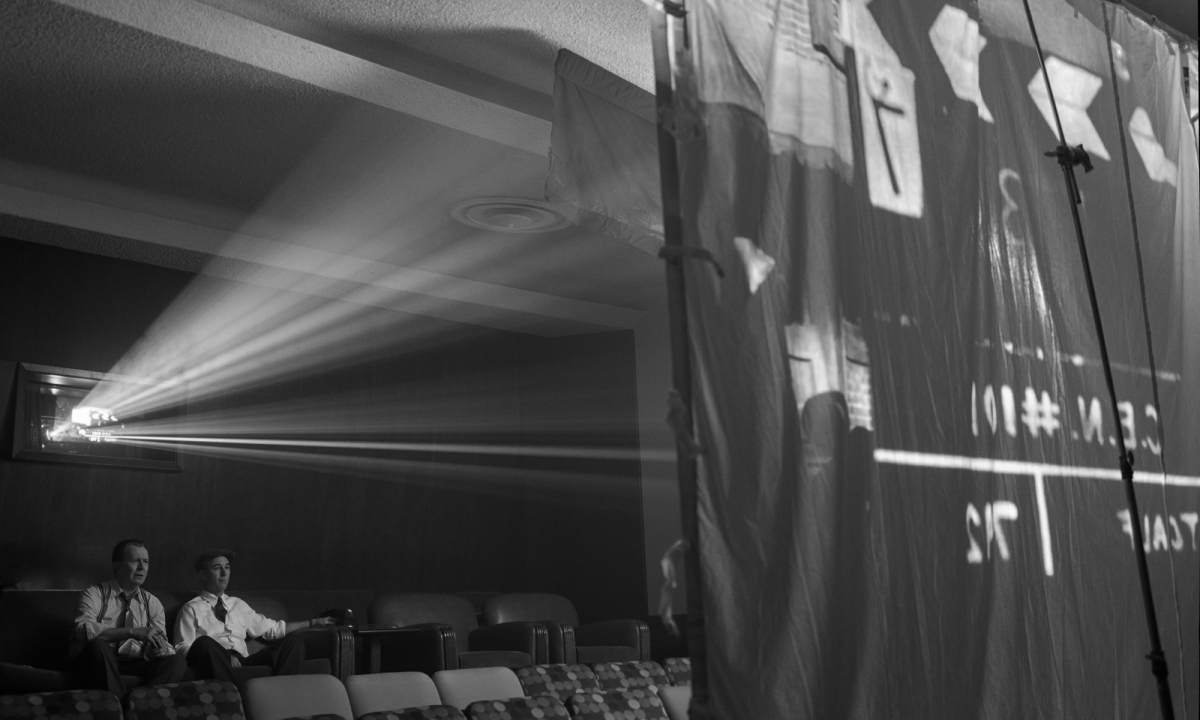 David Fincher‘s longtime sound designer Ren Klyce discusses the soundscape of Mank, conceived as a companion piece of sorts to Citizen Kane (no pressure). What is it about a classic movie that makes it sound, well, classic? From filtering frequencies to adding elements like optical flutter and overlaid reverb, learn about the work that went into making the film sound as if it was booming from the screen of a grand movie palace.

The first time I saw David Fincher’s Mank, I was immediately transformed to my local old-school movie palace, The Rialto. I could imagine myself reclined in the plush red seats, surrounded by red curtains with gold fringe. I could smell the freshly popped corn. And I could hear the film booming in that classic movie palace sound, waves of 1930s-era monaural luxury wafting through a giant center speaker.

Given the current pandemic, that kind of escapism is pretty priceless. It’s exactly what sound designer Ren Klyce and director David Fincher wanted the user to feel while watching Mank.

“That was David’s wish — that you would feel that when watching the film, but our fear along with that wish was that somehow we wouldn’t be able to convey that response,” Klyce explained. “I’m so glad that you picked up on that.”

“Mank” has been a personal passion project for David Fincher for several decades now. His own father wrote the script, about the famously self-destructive writer of “Citizen Kane,” and Fincher was determined to make the film feel as authentic as possible. Almost like it was an undiscovered artifact from Hollywood’s “Golden Age,” insisting for years to film it in black & white, 1:33​, and in mono. He once again joined forces with his longtime collaborator, sound designer Ren Klyce, to do exactly that. But building this time capsule turned out to be a surprisingly challenging process.

“It’s beyond production value. Sound is a portal into a stranger’s mind that is incredibly influential. And if we don’t avail ourselves of this access, um… then we’re stupid and we should die (laughs).” – David Fincher, director of “Mank”

Listen to the Sound + Image Lab: The Dolby Institute Podcast:

Director David Fincher tasked the sound crew with reviving the feel of the Golden Age of Hollywood in the track. They came up with a process of combining old and new technologies to create a “patina” for playback.

Listen to the SoundWorks Collection podcast on:

The Golden Age Sound of ‘Mank’