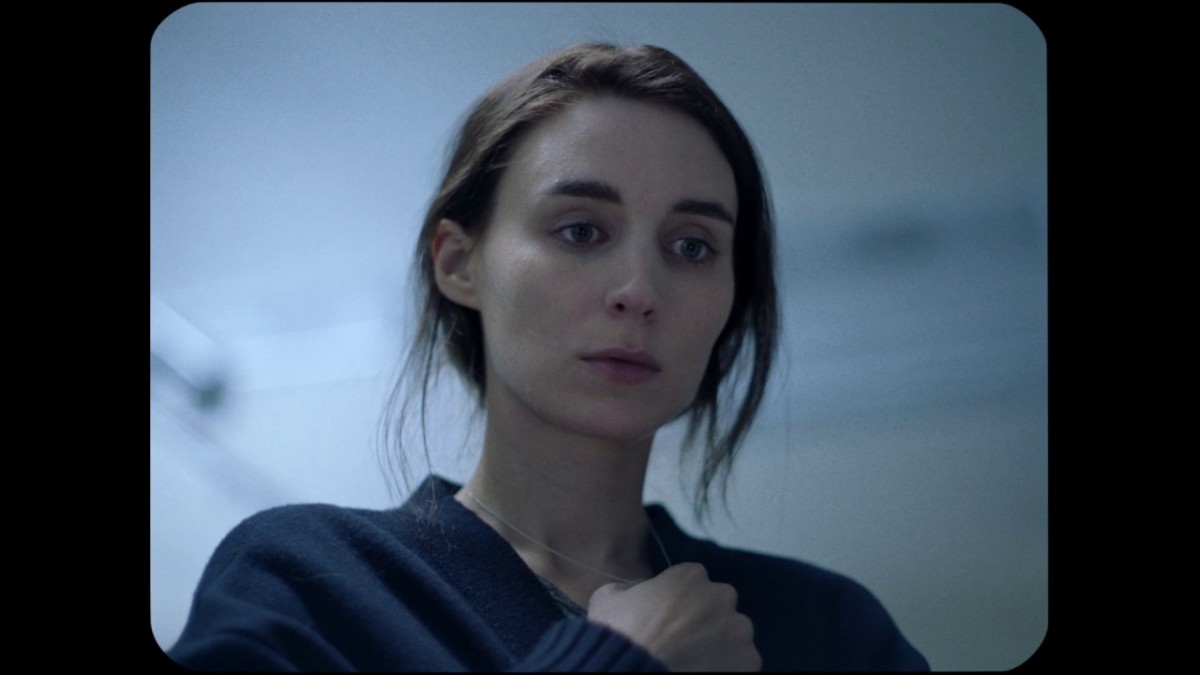 Rooney Mara is addicted to filmmaking vision, and it’s resulted in one of the most surprising young careers Hollywood has right now.

It’s the “A Ghost Story” scene critics can’t stop talking about. Still grieving from the loss of her husband, the widow M returns home and consumes an entire vegan chocolate pie in one sitting. David Lowery captures the moment in a nearly four-minute long take, but the stillness of the camera makes it feel like an eternity. It’s up to Rooney Mara to fill the frame with a sense of hopelessness that anyone who’s been through the grieving process can relate to. She does so with the commitment and the sensitive gusto that has defined a majority of her 12 years as an actress.

Mara first began acting as an extra in movies starring her sister, Kate, before landing television supporting roles on shows like “Law & Order: Special Victims Unit,” “Women’s Murder Club” and “ER.” Now she’s one of the most exciting film stars in the business, with one of the year’s best films in select theaters (read IndieWire’s A review here) and a potential Oscar contender hitting awards season on November 24 (“Mary Magdalene”). Her ascension to becoming an indie film darling has been marked by careful decision-making, and it all started with a shot from Hollywood’s most demanding auteur.

With “A Ghost Story” now playing, it’s become increasingly clear Rooney Mara will never stop surprising when it comes to her performances. Here’s how she made it happen. 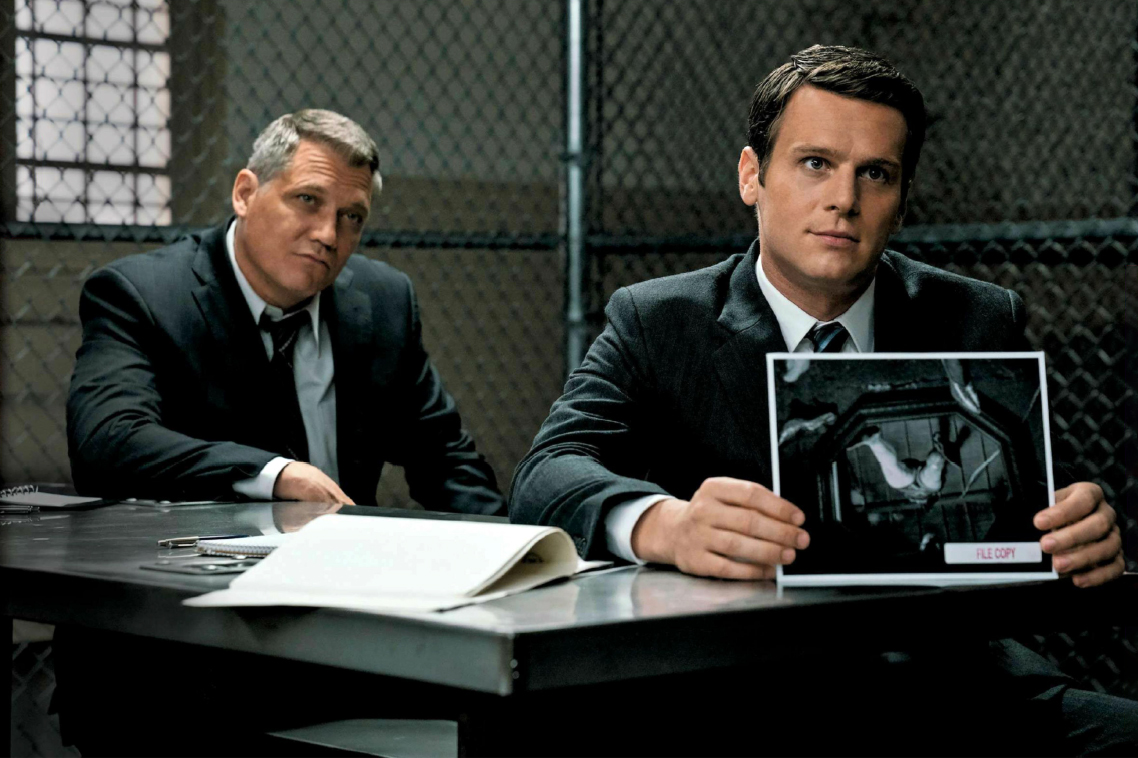 Nev Pierce sits down with David Fincher one more time to discuss Netflix‘s Mindhunter. The September issue of Empire Magazine offers a “First Look” at the conversation. 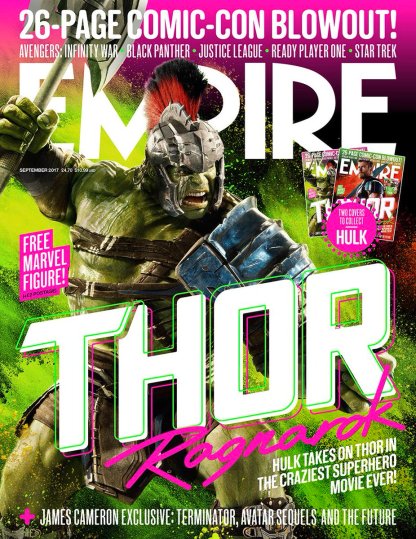 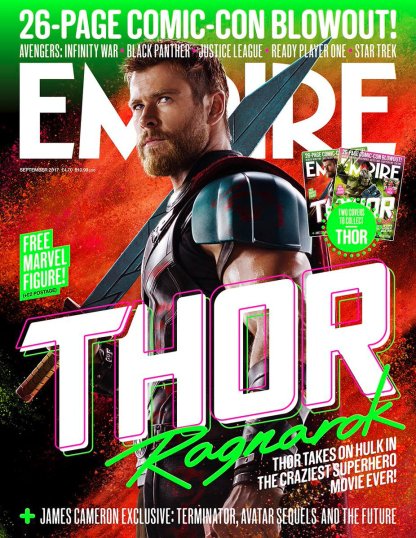 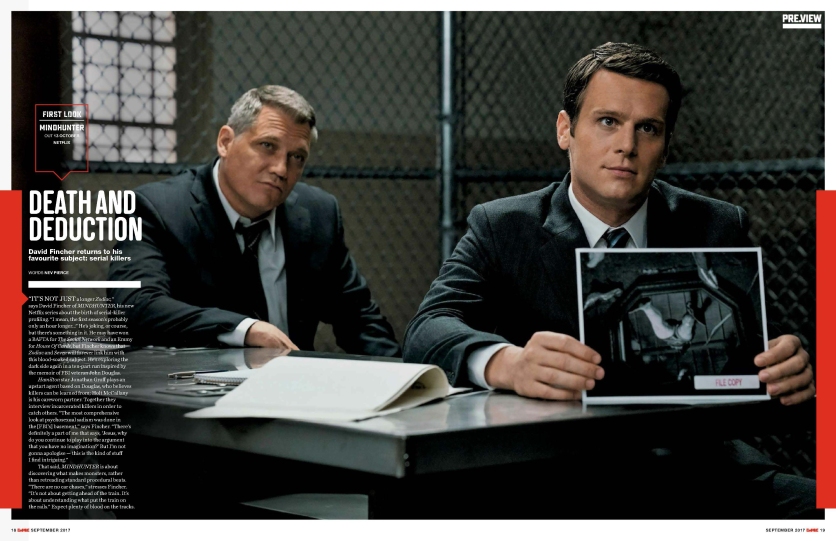 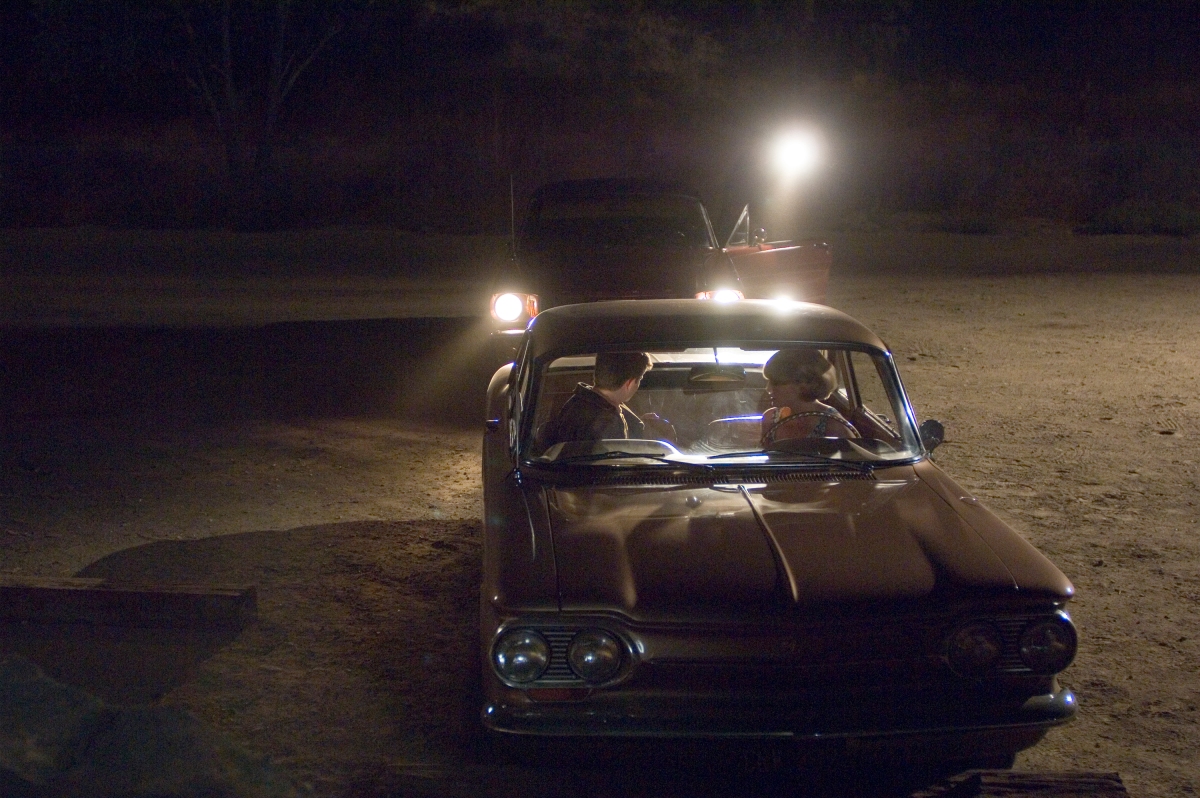 No genre illustrates the evolution of cinema better than the crime film. As recently as the ’90s, Hollywood regularly released stories of cops-and-robber showdowns and mystery-thrillers based on best-selling novels — but as the middle class continues to disappear from Hollywood films, smart crime stories moved to television (see: “The Sopranos,” “The Wire,” “Breaking Bad,” “The Night Of,” et. al.).

Outside the studios, there is a longstanding tradition – from the B-movies to the Coen brothers – of new directors showcasing their filmmaking chops with dark, stylish, and intense crime sagas. A surge of new filmmakers in the ’90s brought fresh interpretations to the genre, from the pastiche of “Reservoir Dogs” to the unnerving realism in “Boyz n the Hood.”

These days, many of the best contemporary directors — including Martin Scorsese, David Fincher, Mann, the Coens, Park Chan-wook and Spike Lee – still love the genre, which has created some of their best work. This list surveys many of those recent highlights. 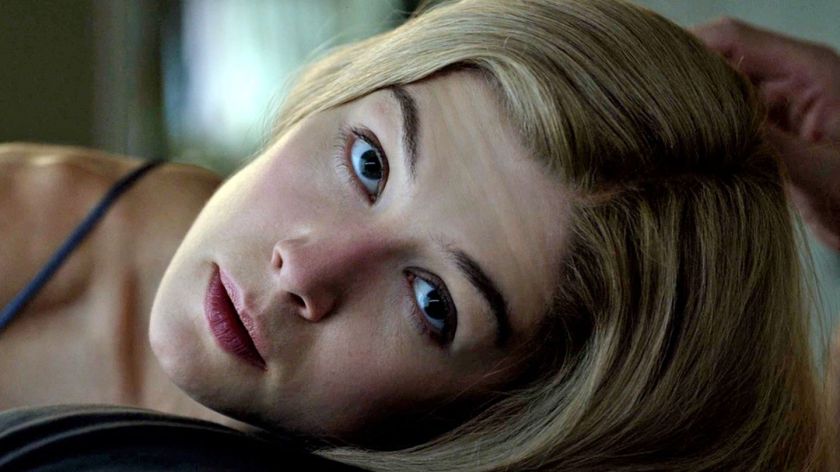 “What’s the point of being together if you’re not the happiest?”

TO CELEBRATE AMERICA, WE’RE TAKING THIS ENTIRE WEEK TO LOOK AT HOW CINEMA HAS EXPLORED THE AMERICAN DREAM. FOR MORE, CLICK HERE.

Gone Girl is a fascinating case study of the American Dream, and most of that stems from Amy Elliott Dunne (played by Rosamund Pike). I don’t quite know how to describe her or even label her – is she an antihero or is she an outright villain? I suppose that depends on whose side you’re on – Amy’s or her husband, Nick’s (Ben Affleck). And even then, the pendulum of opinion can swing constantly.

A toolbox for the construction of plot twists, not an instruction manual (nobody reads those anyway).

A great plot twist is the stuff movie legends are made of. It’s what separates the good from the mind-blowingly great; the fertile ground from which many a movie meme and some of the most iconic lines in all of film history have sprouted (“No, I am your father,” “What’s in the box?!”, Bruce Willis is a ghost, etc.). As a good plot twist thrives on innovation and doing the unexpected, it is impossible to put together a genuine “how-to” guide for the crafting of plot twists. Instead, included below is a curated collection of some of the tools most frequently used in the construction of the best cinematic twists and turns. Maybe some of you might want to use these to craft some of your own twisting narratives, but even if not, as with any art, identifying and understanding the tools being used only enables a deeper appreciation of the finished product.

Allegiances are never simple in a Fincher film.

David Fincher makes some seriously memorable films. That’s like saying water is wet, but his movies are impeccably crafted without seeming ostentatious or painfully clinical. Arguably, the best part about his films is the talking. You won’t find a film of his where character dynamics aren’t laid bare in the form of a lengthy conversation. Literally putting words on screen has been a landmark of his since the beginning of his film career.

Notably, many of Fincher’s movies crescendo to significant arguments and interrogations, and it is never just run-of-the-mill grilling. He has the ability to make talking – for want of a better term – interesting. Part of what makes his interrogations so enveloping and immersive is the insistent, intimate focus on the subjects at hand. Characters are thrust into settings but also command them in cinematically satisfying ways:

Fincher gives us just enough of any given setting, and the details are always overshadowed by the manner in which the characters move and interact within them. (Jones, 44)

Fincher has a new Netflix series coming out in a couple of months; one which will undoubtedly feature some of his signature wordy conversations. While awaiting the release of Mindhunter, we examine what it takes for him to put together the perfect interrogation scene. 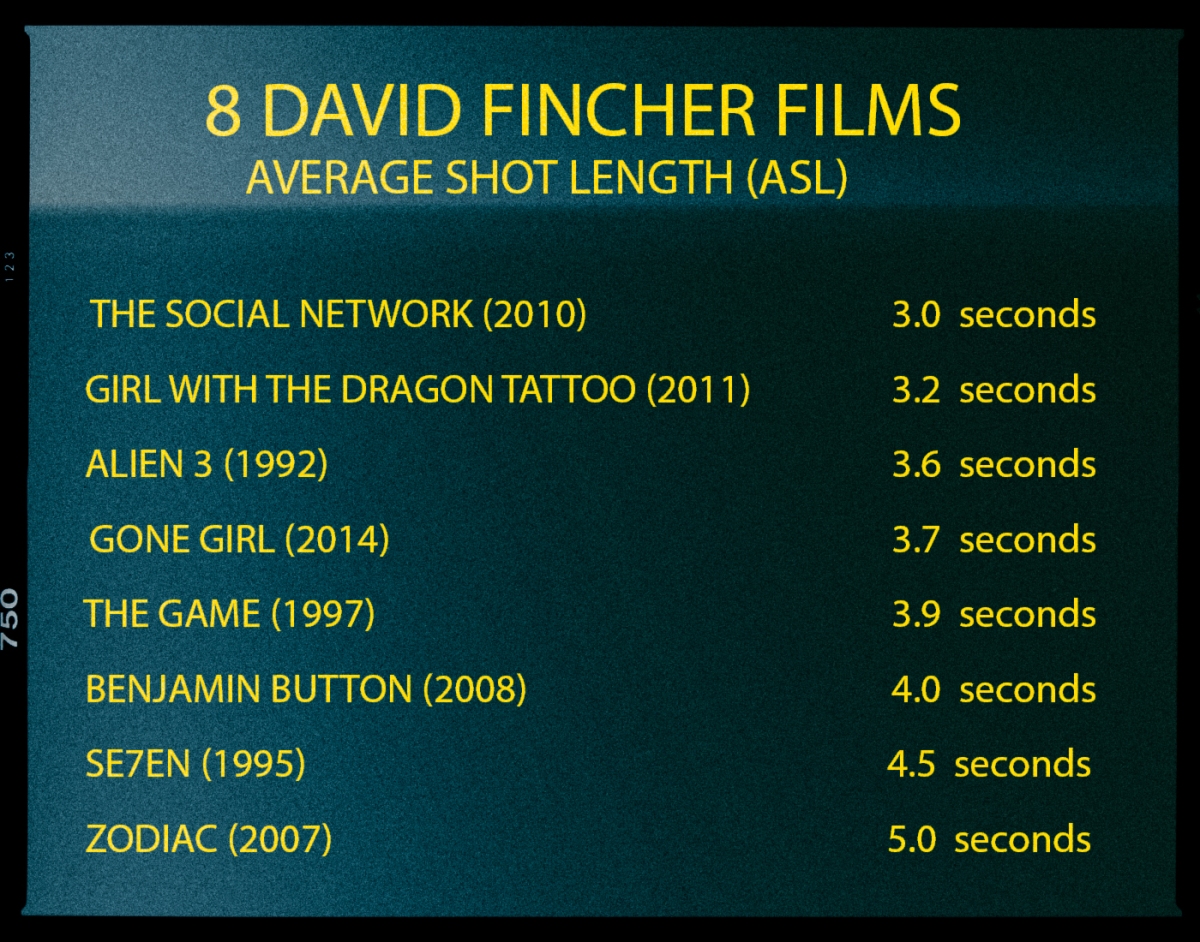 Analyzing the average shot length (ASL) of films / TV / music videos can be very telling or completely irrelevant. Taken as its own metric…it is just a number. The supposition that action / thriller / sci-fi films genres have a shorter ASL is statistically accurate but that does not mean a longer ASL means less tension, action, drama or intensity.

Here’s Every Single One of the 2,400 Shots in ‘Gone Girl’ and Other Fincher Movies

Thanks to film editor Vashi Nedomansky, you can take a bird’s eye view of some popular David Fincher films and analyzing every single shot used.