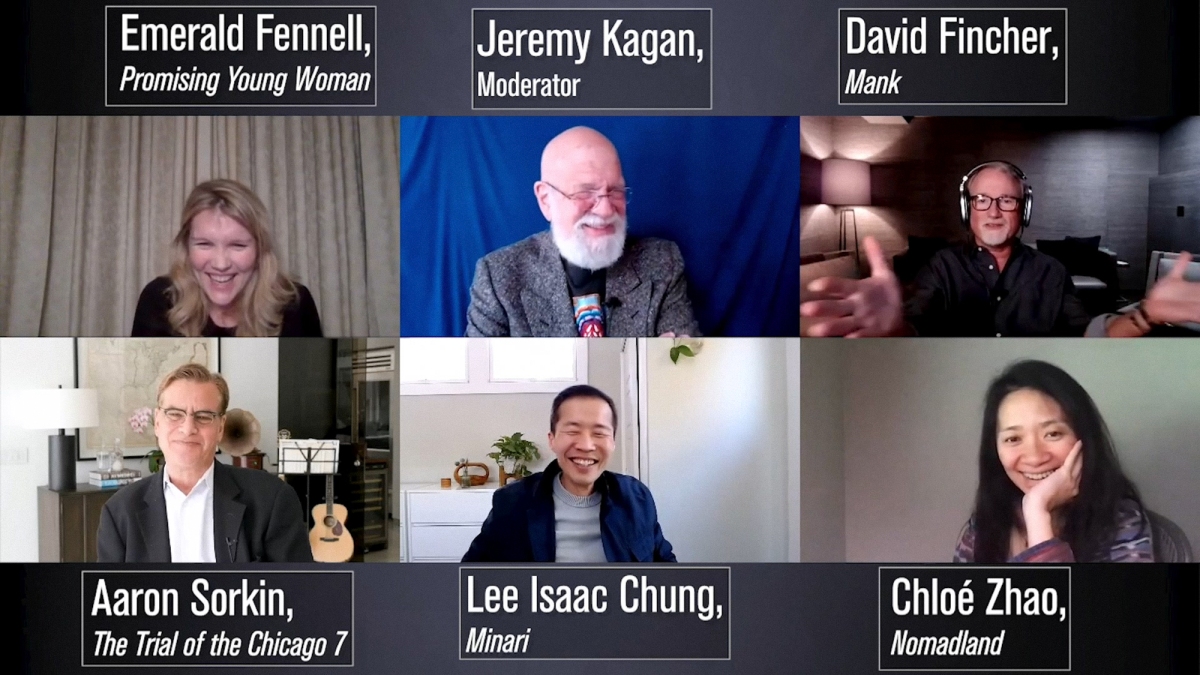 “In this unimaginable year, which has truly been like no other, it’s an extraordinary pleasure and honor to be joined, even if it’s just virtually, by all five of the outstanding nominees,” said DGA President Thomas Schlamme in his welcome to the online audience. “Each of these fine directors join an illustrious line of filmmakers throughout Guild history who have represented the best in directorial achievements. I personally want to congratulate each and every one of you.”

Following a viewing of clips from each of the nominated features, Kagan prompted the nominees to share stories of their individual journeys that brought their powerful films to life.

“For me, it’s always about what do we think we’re doing as much as what we are doing,” said Fennell when asked her methodology for directing actors. “If we think we’re a hero and that goes against what’s happening in the script, play the hero. And it’s giving permission as well for the actor.”

Sorkin revealed his secrets behind the art of directing crosstalk. “Make sure that they put the burden on the other actor. Make them stop you from talking. Don’t stop because of the script told you to stop. And similarly, the actor who is doing the interrupting interrupt them as soon as you hear the word that’s making you say ‘no!’ or whatever is making you argue.”

Chung shared his process when it comes to rehearsals. “I try to make sure I talk throughout it; I don’t let them fully get into the scenes so that part of it they are still working it out mentally. I don’t get quiet and let them do it. …so I can try to preserve when the cameras are rolling that first time.”

“My personal taste is that I want to see what the audience is seeing,” said Fincher about his work preferences. “I work through the camera. I walk-through a number of rehearsals without having monitors up, but from the time we set a master or alternate master, the rest of the day is working through the camera because that’s the only thing that matters.”

“It’s always what’s on the camera,” agreed Zhao. “That’s it. That’s the difference between film and theater. People think because I work with a lot of nonprofessional actors, I’m usually like right there with them. But I love it very much…. because a lot of the time we have the sun right there and we can only do one take.”

Chloé Zhao wins the DGA Theatrical Feature Film Award for Nomadland. Zhao shares gratitude for the recognition and spotlights her fellow nominees for their films.