With ‘Mank,’ America’s most famously exacting director tackles the movie he’s been waiting his entire career to make.

Six years ago, after I contacted David Fincher and told him I wanted to write an article about how he makes movies, he invited me to his office to present my case in person and, while I was there, watch him get some work done. On an April afternoon, I arrived at the Hollywood Art Deco building that has long served as Fincher’s base of operations, where he was about to look at footage from his 10th feature film, “Gone Girl,” then in postproduction. We headed upstairs and found the editor Kirk Baxter assembling a scene. Fincher watched it once through, then asked Baxter to replay a five-second stretch. It was a seemingly simple tracking shot, the camera traveling alongside Ben Affleck as he entered a living room in violent disarray: overturned ottoman, shattered glass. The camera moved at the same speed as Affleck, gliding with unvarying smoothness, which is exactly how Fincher likes his shots to behave. Except that three seconds in, something was off. “There’s a bump,” he said.

No living director surpasses Fincher’s reputation for exactitude. Any account of his methods invariably mentions how many takes he likes to shoot, which can annoy him, not because this is inaccurate but because it abets a vision of him as a dictatorially fussy artiste. Fincher, who is 58, argues that this caricature misses the point: If you want to build worlds as engrossing as those he seeks to construct, then you need actors to push their performances into zones of fecund uncertainty, to shed all traces of what he calls “presentation.” And then you need them to give you options, all while hitting the exact same marks (which goes for the camera operators too) to ensure there will be no continuity errors when you cut the scene together. Getting all these stars to align before, say, Take No. 9 is possible but unlikely. “I get, He’s a perfectionist,” Fincher volunteered. “No. There’s just a difference between mediocre and acceptable.”

Watch the 26:17 min. interview and documentary on vimeo

We speak with Beverly Wood, former Executive VP at Deluxe and Managing Director at eFilm. We discuss the transition in Hollywood from Film to Digital with one of the industries foremost experts on the science behind it all. We discuss how film emulsion actually works, color science, her work with Roger and James, and films like SkyFall, O Brother, Where Art Thou and more.

She’s been with us through our journey from film to digital and is a great source of information in general!

Although mainstream audiences may not be consciously aware of the use of special processes when they watch a film in a theater, they certainly felt the effect while watching David Fincher‘s horrific thriller Seven (AC Oct. ’95), which was photographed by Darius Khondji. A number of the film’s release prints were treated with Deluxe‘s Color Contrast Enhancement (CCE) process to heighten the film’s blacks and add a palpable texture and tonality. 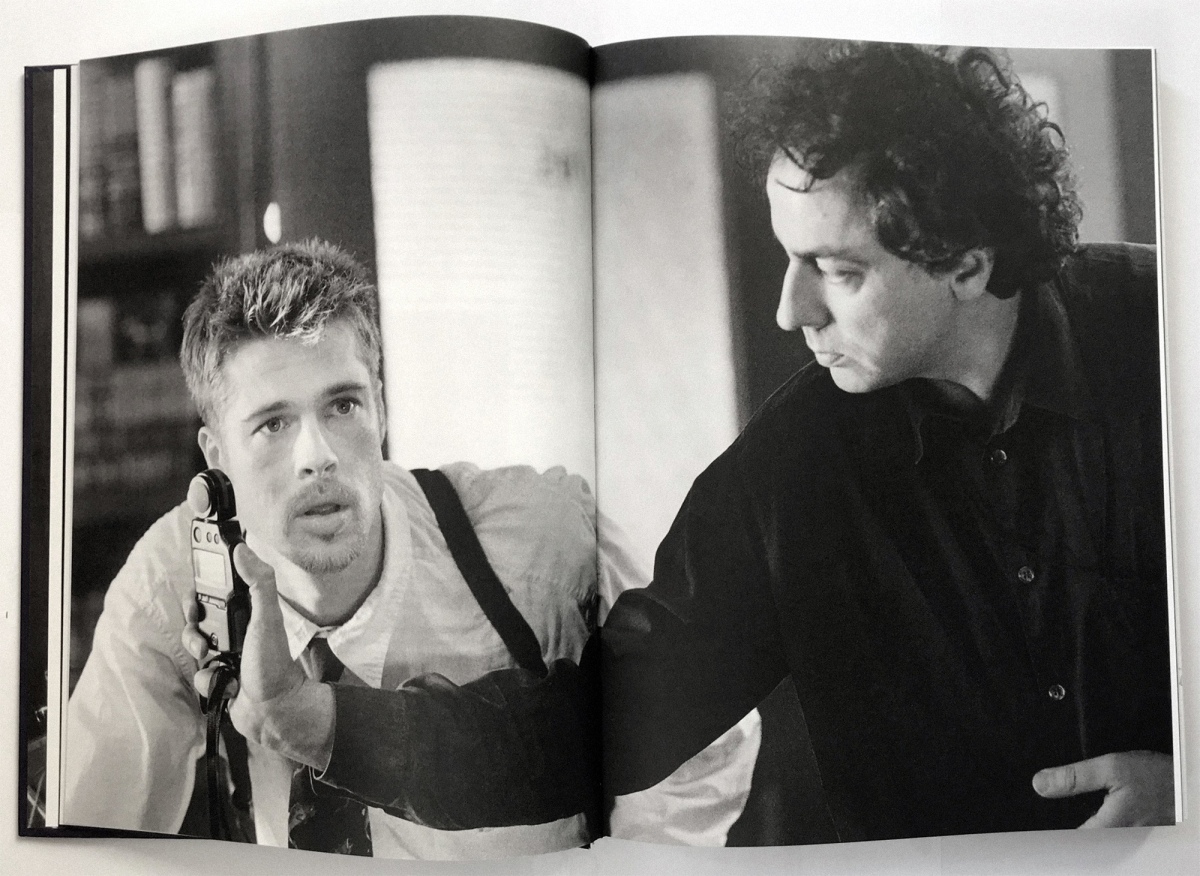 When I visit Darius Khondji, ASC, AFC, in his home in Paris recently for coffee, tea and talk about his art and craft, we speak in his dark living room, with a small pool of light from a lamp on a nearby table, and soft daylight coming through French windows that give on to a snowy courtyard.

Darius’ wife, photographer Marianne Chemetov, kindly agrees to shoot a still of her husband for me near a window. They discuss the lighting. Darius asks to be in silhouette, and, afterwards he darkens Marianne’s photo on his iPhone even further. I ask him about this, and he says: “I like the radical quality of this chiaroscuro.”

The esteemed ASC member reflects on his breakthrough feature Se7en, which helped change the face of Hollywood horror and suspense features and remains a cinematic touchstone.

The following is an excerpt from the new book Conversations with Darius Khondji, written by The Hollywood Reporter film critic Jordan Mintzer and published in a French-English bilingual edition by Synecdoche in Paris. The excerpt is taken from the chapter “Out of the Shadows,” which begins with Khondji describing his work on David Fincher’s Se7en (1995) — the first feature he shot in Hollywood.

Throughout 2019, the Society will honor the best-photographed films of the 20th century, as voted on by ASC members.

Founded on January 8, 1919, the American Society of Cinematographers celebrates its 100th anniversary today.

As part of the centennial festivities, the Society released their members’ list of the 100 milestone films in the art and craft of cinematography of the 20th century. Organized by Steven Fierberg, ASC (The Affair, Good Girls Revolt, Entourage) and voted on by ASC members, the list is the first of its kind to showcase the best of cinematography as selected by professional directors of photography. […]

The 100 films list will serve as a library of influential, key titles that all cinematographers should see as well as an educational tool for students, teachers and film lovers to better understand and appreciate the importance of cinematography. “It is our hope that the list will help cinematography to be better understood by the public — the audience — [and to showcase] each of us as an artist who is an essential contributor to the magic of cinema,” offers Fierberg.

The list represents a range of styles, eras and visual artistry, but, most importantly, it commemorates films that are inspirational or influential to ASC members and have exhibited enduring influence to generations of filmmakers.

The list culminates in a Top 10 by number of votes, while the other 90 titles are unranked.“We are trying to call attention to the most significant achievements of the cinematographer’s art,” Fierberg assures. “We do not presume to call one masterful achievement ‘better’ than another.”

Members chose to frame this list around the 20th century to ensure that enough time has passed for the titles and work to reasonably exhibit enduring influence.

The process of cultivating the 100 films began with ASC members each submitting 10 to 25 titles that were personally inspirational or perhaps changed the way they approached their craft. “I asked them — as cinematographers, members of the ASC, artists, filmmakers and people who love film and whose lives were shaped by films — to list the films that were most influential,” Fierberg explains. A master list was then complied, and members voted on what they considered to be the most essential 100 titles. […]

Detailed essays and historical information on each title will be published over the coming months, celebrating the diverse, global art form of cinematography throughout the ASC’s Centennial year. […]

There are less than 20 gunshots fired in David Fincher’s 1995 film Seven, each exchanged between David Mills and John Doe. If you don’t count Detective Somerset’s late face slap, there is only one wounding act of violence committed onscreen. It’s an oft-shared description offered by cinephiles and aspiring screenwriters and critics: Seven is, in the most basic sense, a non-violent film, even as watching it feels like a very violent viewing experience. For most of its run-time, Seven, which this week celebrates its 20th anniversary, is a noir- serial killer thriller built around already murdered corpses rather than murderous acts. Yet, this basic quantifiable description feels misleading to anyone watching or re-watching the film, anyone caught within or recently escaped from the spiraling trap of the film’s increasingly unsettling, malicious scenes.

Seven is widely credited for displaying influence from prior detective films and inspiring several films of comparable serial killer concern, but few films in either comparative line have less character violence and yet even fewer give as distinct an impression of having witnessed something truly violent.

Slightly more than 22 years ago, David Fincher, a talented filmmaker who made music videos and commercials and was left by his directorial stint on his first feature Alien 3 so disillusioned and bitter he felt “he’d rather die of colon cancer than do another movie,” stumbled upon a script that would renew his faith in the filmmaking business. This particular piece was written by Andrew Kevin Walker, and was deemed too dark and bleak to succeed. The story was largely shaped by Walker’s experience of living in New York City for a couple of years, where he felt alienated, lonely and unhappy. Desperately trying to get his story made, Walker agreed to rewrite the screenplay on the demand of director Jeremiah Chechik (Christmas Vacation), and it was this altered version that should have ended up in Fincher’s hands. But the studio made a mistake, delivering Walker’s original piece to Fincher, who was immediately intrigued and, even when the mistake was explained, chose to insist on the utter darkness Walker envisioned. By mere happenstance, therefore, Se7en found its director and made the first, crucial step on its way to cinematic immortality. […]