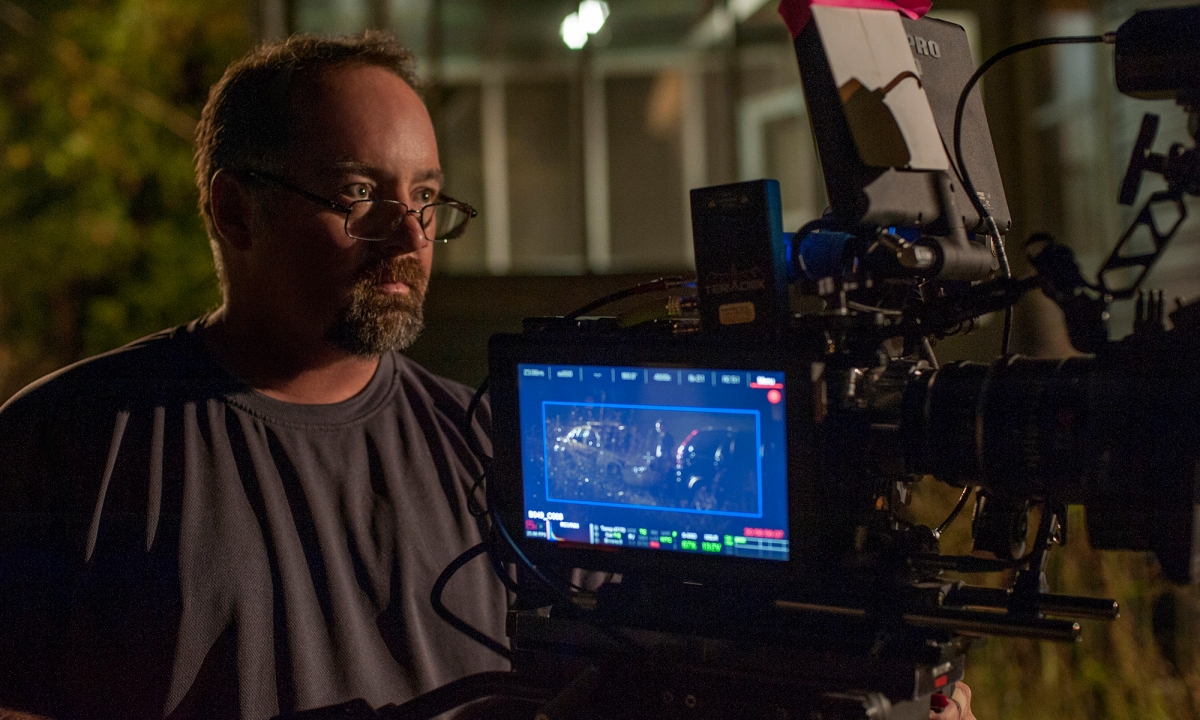 Jeff Cronenweth on the set of Gone Girl (2014, Merrick Morton)

Cinematographer Jeff Cronenweth, ASC lensed his first feature, “Fight Club,” in 1998.  He earned Best Cinematography nominations from the Academy of Motion Picture Arts and Sciences and the American Society of Cinematographers for two more collaborations with director David Fincher, “The Girl With the Dragon Tattoo” (2011) and “The Social Network” (2010).  Cronenweth also shot Fincher’s “Gone Girl” (2014), Kathryn Bigelow’s “K-19: The Widowmaker” (2002) and Sasha Gervasi’s “Hitchcock” (2012).  He recently completed director Sam Taylor-Johnson’s “A Million Little Pieces,” based on the literary hit.

In addition to his feature career, Cronenweth is known for his stylish and CLIO Award-winning music videos and commercials.  In the last two years he shot music videos for Katie Perry, Jennifer Lopez, Pink, Maroon 5 and Taylor Swift.  A native Angelino, Cronenweth studied filmmaking at the University of Southern California (USC) and began his professional career apprenticing to some of the industry’s greatest cinematographers, including Sven Nykvist, ASC, John Toll, ASC, Conrad Hall, ASC and his father, the late Jordan Cronenweth, ASC.

Cronenweth, behind the camera A on left, and his crew set up double coverage for a scene between Tyler Durden (Brad Pitt) and the film’s nameless narrator (Edward Norton). On the right, B camera operator (and future Panic Room cinematographer) Conrad W. Hall. (1999, Merrick Morton)

What was your pathway into this field?

“My great-grandfather owned a photo store in Pennsylvania.  My dad’s dad won the last Oscar given for portrait photography: He was a staff photographer for Columbia [Pictures]. My grandmother was a Ziegfeld Follies dancer.  My dad [Jordan Cronenweth, ASC] won a BAFTA for ‘Blade Runner’ (1983) and got an Oscar nomination for ‘Peggy Sue Go Married’ (1987).  So as a child I often visited sets and went on location for extended stays.  I felt like I wanted to be part of that great experience, that camaraderie.  Each day was like a military unit battling to bring back great images.

“I knew I wanted to do something in the industry: I had been around it all and found it all so exciting.  I made many Super 8 films in high school and decided USC (the University of Southern California) was where I wanted to attend film school.  But two years into school Film Fair, a commercial production company my father had collaborated with, had a position open for a staff loader and that job offered the opportunity to get into the union.  I visited my dad as often as I could when he was shooting ‘Blade Runner’ and assisted him on other movies as a camera operator and on second unit.  A lot of relationships I formed then carried over when my dad retired.

“I met [director] David Fincher on a Madonna video my father photographed and I shot second unit for in the heyday of music videos – it was a very creative and innovative time, and I was grateful to be there.  I was his camera assistant on the documentary ‘U2: Rattle & Hum’ (1988) and the film ‘State of Grace’ (1990), both directed by Phil Joanou, a former USC film school classmate.  Then I got my first feature as a cinematographer, ‘Fight Club,’ with Fincher.  Not a bad credit for the first time out of the gate!”